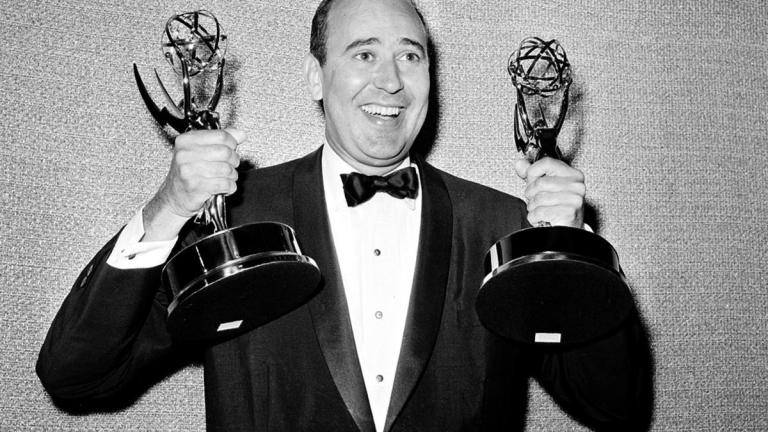 Comedy legend and TV pioneer Carl Reiner died at 98, according to Variety. His assistant, Judy Nagy,  said he was with his family when he died of natural causes at his home in Beverly Hills on Monday night.

Reiner was one of the true greats. He helped shape comedy on television from the early golden era. Filmed comedy would not be the same without him. Even standup comedy owes him a great debt. There are sandwiches named after him in kosher delis around the world. Reiner was always beloved, and forever acting. He was instantly popular from the moment he appeared on Sid Caesar’s Your Show of Shows in 1950. He and Mel Brooks brought a party gag to national prominence they created the “2,000 Year Old Man” routine. He was veteran conman Saul Bloom in Steven Soderbergh’s Ocean’s Eleven movie franchise, played Charlie Sheen and Jon Cryer’s stepfather on Two and a Half Men. He was “Carl Reinorcerous” in Toy Story 4.

Reiner is best known for creating The Dick Van Dyke Show, which ran on CBS from 1961 to 1966. He starred in the pilot for a show which he called “Head of the Family,” but it wasn’t picked up. Producer Sheldon Leonard decided to give it another chance, but recast Dick Van Dyke in the role of Rob Petrie, the head writer on a TV variety show, along with fellow writers Rose Marie and Morey Amsterdam.  Mary Tyler Moore played his wife. They lived in New Rochelle, N.Y. Reiner wrote the scripts off his own experiences. Reiner won three writing Emmys, and the show was named outstanding comedy series in 1966. He also acted on the show, at first only seen from the back. He played Alan Brady, the star of the variety show. It was based on his old boss, Sid Caesar of Your Show of Shows and Caesar’s Hour.

Carl Reiner was born in the Bronx on March 20, 1922. His parents were Jewish immigrants from Austria and Romania. He graduated from the former Evander Childs High School in Williamsbridge when he was 16 and became a machinist’s helper at a Manhattan hat-making shop at 17. Carl’s older brother Charlie nudged him into acting by pushing him to take about free drama classes sponsored by President Franklin D. Roosevelt’s Works Progress Administration. Reiner served in the US air force during World War II. His experience was documented in the 2018 PBS documentary GI Jews: Jewish Americans in World War II. During service, Reiner joined the performing unit.

After the war, Reiner performed with a touring theatre company. He made his Broadway debut in the musical Inside U.S.A., which ran from 1948 to 1949. In 1950, he joined Sid Caesar’s Your Show of Shows, acting in and writing with a staff which included Neil Simon, Larry Gelbart, Lucille Kallen, Selma Diamond, Woody Allen and Mel Tonkin. Mel Brooks also wrote for the show.

Reiner’s career spanned over seven decades. So did his friendship with Brooks. They are best known for their improvised masterpiece “The 2,000 Year Old Man.” The sketch first appeared on record in 1960. It won a Grammy in 1999 for Best Spoken Comedy Album. After Your Show of Shows, Reiner went to work on Caesar’s Hour, a sketch comedy program which ran from 1954 to 1957.

Reiner appeared in films like It’s a Mad, Mad, Mad, Mad, World (1963), and The Russians Are Coming (1966). While writing for the Dick Van Dyke Show, Reiner also wrote and directed the Broadway production Something Different, which ran from 1967 through 1968. Reiner made his feature film directorial debut with Enter Laughing in 1967. It was an adaptation of his semi-autobiographical 1958 novel about a Jewish kid trying to break into show business. He directed Van Dyke in The Comic (1969). He would go on to direct Where’s Poppa? (1970), which starred George Segal as a lawyer who tries to scare his senile mother, played by Ruth Gordon, to death. He also directed Oh God! (1977). Written by M*A*S*H creator Larry Gelbart, the film starred George Burns as the title character and John Denver as his reluctant messenger. Reiner also helmed the Henry Winkler wrestling comedy The One and Only.

Steve Martin asked Reiner to direct his debut film, The Jerk (1979). They followed this with Dead Men Don’t Wear Plaid (1982), the black-and-white film-noir parody intercut characters from 1940s films, including Barbara Stanwyck, Humphrey Bogart, and Ava Gardner. The continued their string with The Man with Two Brains (1983) and All of Me (1984), which paired Martin with Lily Tomlin. Reiner also directed Summer Rental (1985), Summer School (1987), Bert Rigby, You’re a Fool (1989) Fatal Instinct (1993), and That Old Feeling (1997), which starred Bette Midler and Dennis Farina.

On TV, he also appeared in episodes of Ally McBeal, The Bernie Mac Show, Boston Legal, The Carol Burnett Show, Good Heavens, House, The Larry Sanders Show, Life With Bonnie, Parks and Recreation and Rowan & Martin’s Laugh-In. He did voice acting on American Dad, Hot in Cleveland, Bob’s Burgers and King of the Hill. He won an Emmy for his appearance on Mad About You. In 2017, Reiner appeared in the HBO documentary If You’re Not in the Obit, Eat Breakfast, alongside Mel Brooks and Kirk Douglas.

As a member of the American Labor party, Reiner emceed a 1947 charity event for veterans of the Spanish civil war at Carnegie Hall. It was at the height of McCarthyism, and the FBI sent two agents to ask if Reiner might name communists. He politely refused, telling the agents “Communist actors don’t go around telling you that they’re communists.” In 2018, he caught the attention of the current administration by tweeting “I’m 96-and-a-half years old. I lived through the Great Depression; I served in World War Two in our fight to defeat fascism; I’ve seen the invention of television and performed on television, even before my family owned one. But what I’ve never seen is the American people being lied to every day …”

Reiner was awarded the Mark Twain Prize for American Humor in 2000.”Nothing pleases me more than knowing that I have lived the best life possible by having met & marrying the gifted Estelle (Stella) Lebost,” Reiner tweeted Saturday, “who partnered with me in bringing Rob, Annie & Lucas Reiner into this needy & evolving world.” He married cabaret singer Estelle Lebost in 1943. She was 29, he was 21. Estelle was the customer at the restaurant who witnessed Meg Ryan’s fake orgasm, and tells the waitress, “I’ll have what she’s having” in their son Rob Reiner’s 1989 film When Harry Met Sally. Lebost died in 2008, and Reiner is survived by three children, Rob, Sylvia and Lucas.