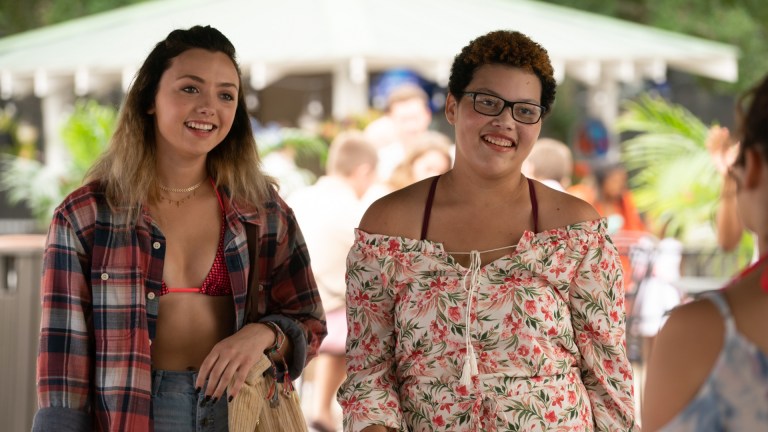 Cobra Kai season 3 brought back several beloved characters from the original Karate Kid movies including Daniel’s first two loves, Ali (Elisabeth Shue) and Kumiko (Tamlyn Tomita), Daniel’s second major nemesis Chozen (Yuji Okumoto) and many more. In the process, however, season 3 also left some Cobra Kai characters on the sidelines. Fans sorely missed Aisha Robinson (Nichole Brown) and Raymond a.k.a. ‘Stingray’ (Paul Walter Hauser). Aisha has been part of the series since the beginning. She was the first female student of Johnny’s (William Zabka) Cobra Kai Dojo. Stingray first appeared in season 2 and has been the oldest Cobra Kai student so far.

Aisha is dismissed within the season 3 premiere episode ‘Aftermath.’ There’s a curt explanation that her parents moved her to private school after the catastrophic fight at the end of season 2. That seems appropriate. Given the damage to the student body, it’s amazing that West Valley High School remained open at all. Stingray applied as a security guard at the school at the end of season 2. However, when the brutal season finale brawl broke out, he beat down several students – not cool even in the world of Cobra Kai. He was dismissed in ‘Aftermath’ as well. Another curt explanation said he was under a restraining order forbidding him from being within 500 feet of a minor. Presumably, this is why he can no longer attend the Cobra Kai Dojo either.

Aisha played a major role in season 1 as another victim of bullying. She becomes the second student at Cobra Kai and finds her strength through Karate. Aisha is a smart character, a true kind heart suffering some pent-up aggression from past mistreatment and marginalization from the teen cliques. Her struggle resonated with the fans and won their hearts.

To have good bullies, Cobra Kai created some good nerds, or as Johnny puts it in his ‘80s non-PC way, “pussies.” Stingray is a caricature of a martial arts fanboy, an awkward, immature, and overweight dude who still lives alone with his mom. He also finds his strength through Karate. By emulating Eli Moskowitz’s (Jacob Bertrand) transition from nerd to bully, Raymond also ‘flipped the script,’ transforming into Stingray just like Eli became Hawk. He is a far less likeable character than Aisha, played predominantly as comedy relief, until he turns merciless and not so funny anymore.

For Brown, Cobra Kai has been her first and only notable acting role. In November 2019, Brown announced over her Instagram that she would not return for season 3, stating “Officially NOT in Season 3 of #CobraKai. Unfortunate, but thank you for the opportunity and time I had on the show.” Since then, this message was removed. Like with any cast exit, there were some rumors of issues on the set, but nothing validated. Brown also posted about a run of recent personal difficulties she experienced including medical issues, financial hardships, and her boyfriend crashing her car while under the influence. Since then, her social media has been more cheerful.

In contrast, Hauser is an actor and comedian that has been in the business for over a decade, often playing affable yet somewhat sinister schlubs like Stingray. He had roles in I, Tonya, BlacKKKlansman, and Da 5 Bloods. Hauser won critical acclaim as the titular character in Richard Jewell, based on the real-life story of the security guard who discovered the bomb during the Summer Olympics in 1996. Richard Jewell came out the same year as season 2 of Cobra Kai when Stingray appeared. A few days after Cobra Kai season 3 came out, Hauser binged it and posted on his Twitter “It’s legit my favorite show.” He applauded the creators, Jon Hurwitz, Hayden Schlossberg, and Josh Heald, and even added a “#hashbrown” for good measure.

Though Stingray and Aisha were notable absences in Cobra Kai season 3, could they return in season 4? If Cobra Kai can bring back Kumiko, Chozen, and Ali, anything is possible. There was a tremendous outpouring of disappointment when Aisha didn’t return, so much so that Hurwitz responded by telling TVLine “We love Aisha and we love Nichole Brown.” He went on to state the obvious “That just because a character doesn’t appear for a period of time doesn’t mean they’ve left the universe, that they can’t return again.” This has already happened with other cast members from Cobra Kai. After being supporting characters throughout season 1, Kyler (Joe Seo), Yasmine (Annalisa Cochrane) and Louie LaRusso Jr. (Bret Ernst) were absent from season 2, only to return in force for season 3.

Given that Aisha is such a fan favorite, it would be a good play for Cobra Kai to have her return in the future. Stingray headed down a dark path and could return as a major villain. Hauser already has several films in post-production scheduled for 2021 release, including Cruella, Disney’s live-action prequel of 101 Dalmatians. He’s cast as Horace, one of the bumbling henchmen of the titular villainess. With season 3, Cobra Kai proved that it can play its cameos with heart and panache. For now, fans can only wait until season 4, which is currently slated for late 2021.

Cobra Kai season 3 is available to stream on Netflix now.