In the best of all worlds, the cast of Sky-HBO’s Chernobyl would have been speaking in Russian and Ukrainian with English subtitles, says series director Johan Renck. Speaking at ‘The Making of Chernobyl’ as part of this year’s online Bafta Television: The Sessions series, Renck explained that there had been discussions about making the nuclear disaster drama in Russian and Ukrainian instead of English but ultimately, it proved unfeasible for the international co-production.

Was it ever planned for Jared Harris, who played nuclear scientist Valery Legasov in the multiple Bafta-nominated drama, to speak his lines in English using a Russian accent? No. ‘That accent on film is tremendously stupid,’ was Renck’s explanation.

‘The people that were the most pleased about our choice in the accents were the Russian speakers,’ Mazin continued, relaying feedback from members of the crew and viewers who were ‘tired of hearing their language butchered and mocked.’ The production took great pains to ensure that what appeared on screen didn’t look like ‘another dumb impression’ of people from Eastern Europe.

Jared Harris’ explanation for his English accent in the Russian role is simply that the characters were ‘speaking in their own language’ and therefore it made sense for the actors to use their natural accents.

Though many actors are skilled with accents, explained Mazin, the problem is that non-native accents can draw too much attention in a scene when ‘people start acting the accent.’ 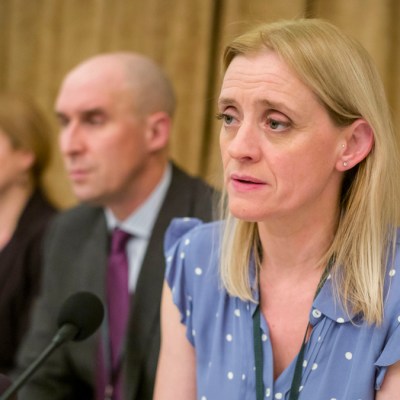 
The Salisbury Poisonings, Chernobyl and the Power of Truth-Telling in a Crisis

Chernobyl’s approach, Mazin explained, was to tell the cast to use their own accent but ‘take a bit of edge off it’. Emily Watson and Jessie Buckley were among those who used soft versions of Eastern European accents for their characters, respectively Belarusian scientist Ulana Khomyuk and Ukrainian Lyudmilla Ignatenko. Other cast-members spoke in a variety of regional UK and European accents, the idea being to represent the multiplicity of nationalities and voices in the Soviet Union at the time the nuclear catastrophe took place.

The Swedish actor who played Soviet politician Boris Shcherbina, Stellan Skarsgard, was too fluent in English, says Mazin, with an English-speaking accent that veers towards American. To play Shcherbina, Skarsgard was asked to speak in the Swedish accent of somebody less skilled in English than he really is.

American accents were something they definitely didn’t want to hear, says Mazin. The cast, which featured over 100 speaking parts, was kept European with no Americans in lead roles. ‘It is a European story and there is a sense of staying within the boundaries of Europe,’ he told the online Bafta audience.

Skarsgard, though not present at the session, had the final word. When tackled on the accent question at the time of release, remembered Harris, the Swede responded to an irate questioner with the unassailable point that ‘No-one’s ever watched Hamlet and complained that they aren’t speaking English with Danish accents!’

The Virgin Media British Academy Television Awards will be broadcast on BBC One on Friday 31 July.