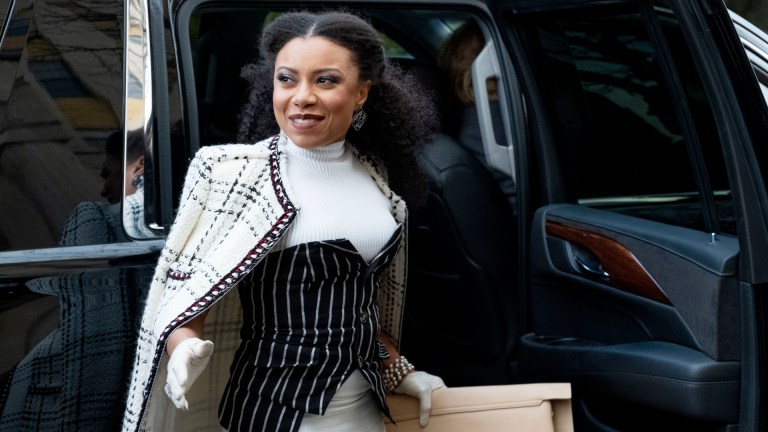 Search Party season 3 finds its core characters in a place they probably expected to be ever since the violent events of the show’s first season finale: on trial for their lives.

As portrayed by Shalita Grant (Santa Clarita Diet, NCIS: New Orleans), precocious lawyer Cassidy Diamond is one of Search Party’s finest-ever creations. The unmistakably millennial legal defender has all the hallmarks of a Brooklynite young professional – the ostentatious outfits, the sing-songy vocal lilt, and a powerful sense of self-confidence only barely covering up crippling anxiety. She fits the show like a glove…and not a glove shrunk by forensic testing so as to not fit on a defendant’s hand.

Search Party co-creators Sarah-Violet Bliss and Charles Rogers describe Cassidy as an easy character to write, yet a hard role to cast. Like the rest of Search Party, Cassidy walks a tightrope between a cartoonish depiction of an overly confident buffoon – and a real human being. It wasn’t until Shalita Grant auditioned that the whole thing clicked. And according to Grant, the reason for her success with Cassidy Diamond was on the casting page to begin with.

“The thing that leapt out to me was the vocal fry,” Grant says. “That was totally S.V. and Charles. I saw ‘vocal fry’ and I immediately got a picture, an image of someone, and immediately felt a judgment.”

“Vocal fry” is a term that describes a voice’s tendency to draw out the end of words or sentences with a low, creaky voice. It’s often deployed in a sexist context to criticize women’s voices in auditory mediums like radio and podcasting. For Grant, however, it was the starting point for fully understanding how to make the comedic/dramatic tightrope characterization of Cassidy Diamond work.

“I found out that (vocal fry) is actually a byproduct of young women trying to pitch their voices lower than it is natural,” Grant says. “There was all this research about ‘why would a woman want to pitch her voice lower?’ And what they found out is that this is the response to the stereotype and the sexist myth that women’s voices are grating because they’re so high-pitched and we sound like children and it’s not professional. So these women had responded by trying to make their voices lower, to this really now comedic effect.

“The funny thing about how sexism works is that men have vocal fries too. Men try to pitch their voices down lower too, because it is seen as more masculine to have a lower voice. Lil Wayne has a vocal fry and no one talks about it. We don’t even think about it, but he’s frying. He’s frying all over the place.”

Cassidy Diamond is not only a young woman trying to operate in a traditionally male space, she’s part of a generation that was long infantilized and is now trying to experiment with the concept of “adulting.” And that makes her pretty much the consummate Search Party character. From that one “vocal fry” note alone, Grant was able to develop a shockingly thorough sociological profile of a character who rarely appears out of the context of her job in court.

“She’s just in her own experience all the time. And it is scary. It’s a scary thing,” Grant says. “But she doesn’t let it stop her. She keeps going. She tries and, through ridiculous effort, sometimes wins.”

Grant’s understanding of Cassidy includes the knowledge that the lawyer is attention and fame-focused to the point of needing a roster of Teddy bears on her bed to practice her closing arguments on.

“The Teddy bears were one of my ideas,” Grant says. “It should be a moment into Cassidy’s world, into her life, into the way that she thinks. Her private world. And I think that Teddy bears were totally the right thing to do. That’s Cassidy’s thing, is her ability to make connections. And look at her doing it.”

That understanding of the character also extends to the notion that her name probably isn’t “Cassidy Diamond” in the first place.

“In my mind, I just decided that her mom is Canadian and her dad is in tech. And Cassidy Diamond is her nom de plume,” Grant says. “That is going to skyrocket her into fame. And not just money. Because I think Cassidy wants visibility. So Cassidy Diamond is a hot name in the press.”

Ultimately, Cassidy never catches that skyrocket to fame. Dory fires her legal representation before she gets a chance to make her closing argument. And unfortunately, according to Grant, the character is not expected to make an appearance in the already-filmed season 4 either.

Closing argument or no, Cassidy Diamond stands out in Search Party season 3 as the perfect example of the show’s highly character-focused approach to both comedy and character. And if nothing else, Grant views Cassidy as a portal back into the comedy world.

“I just got off of three years of a procedural. And prior to that, I was doing comedy on Broadway. So when I got the opportunity to jump into this show, every scene was just about how much joy I can extract from every moment. I’m so happy to be back in this space. And I just wanted to show my gratitude for that,” she says.