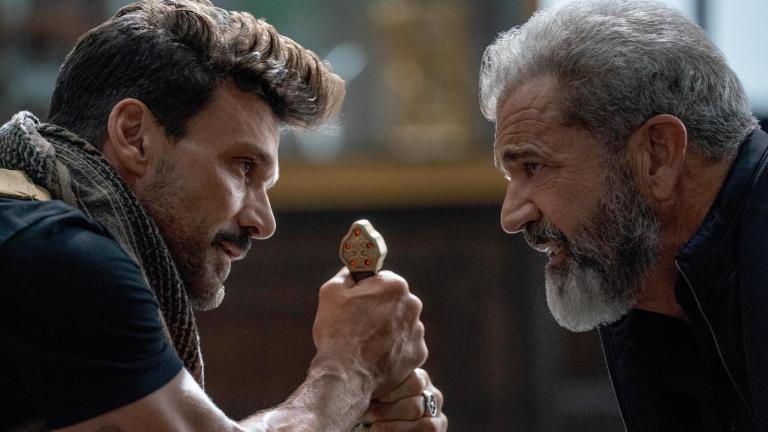 The new action sci-fi thriller Boss Level begins with former Special Forces agent Roy Pulver (Frank Grillo) and an unnamed woman waking up in Pulver’s bed, fully clothed, after what looks like a rough night. But things get rougher very quickly, as an assassin enters Pulver’s apartment and attempts to kill him. Pulver defeats him but ends up dying anyway–only to wake up the next morning and do the whole thing again, perhaps living a little longer and getting killed by someone else, but still dying.

In a running voiceover, Pulver casually informs us that this is the 140th time he’s done this. And he still can’t figure out why or how it’s happening, or how to break out of the time loop he’s stuck in. All he knows is that he will wake up again on the very same morning and despite doing everything he can to prevent it, will nevertheless get shot or stabbed, or beheaded or run over, for reasons unknown. He also knows that his destiny is linked to that of his scientist ex-wife (Naomi Watts), the son who doesn’t know Pulver is his father (Rio Grillo) and his ex-wife’s sinister boss (Mel Gibson).

Boss Level is directed and co-written by Joe Carnahan, who revamped a script originally written by Chris and Eddie Borey. It’s the first feature film Carnahan has directed since 2015’s Stretch, and continues his exploration of taking different approaches to hardcore action and crime thrillers, a track record that includes movies like The Grey (2011), The A-Team (2010), Smokin’ Aces (2006), and Narc (2002). But Boss Level is different in that it also represents Carnahan’s first full dive into sci-fi territory.

“The Boreys wrote this really great script called Continue,” says Carnahan when we connect via Zoom. “I had read it. It started out as kind of a rewrite job. I dug it, because I’ve always loved, as I think a lot of us do, the subgenre of the time loop. It’s kind of a proven commodity in movies. As I got into it more, I was like, ‘I’m not really a sci-fi guy.’ But [late director] Tony Scott, rest his soul, was one of my great mentors. I always loved the way he treated Déjà Vu, which is a great kind of brick and mortar approach to time travel.”

Carnahan says he applied the same approach to what eventually became Boss Level, explaining, “The more fantastical elements of it, I wasn’t really concerned about. But I did love the idea of kind of combining Groundhog Day and Die Hard–the way I think that Doug Liman did it with Cruise in Edge of Tomorrow. But I thought it’d be much funnier if the guy was just bored stiff by all of it and didn’t know what the hell to do.”

The title of the movie itself is a gaming reference (the “boss level” is the final and usually most challenging level of a video game), and Carnahan admits that the narrative is set up to mirror the way a player moves through the levels of a game–sometimes repeating them over and over again.

“That was absolutely deliberate,” he says. “I’m not a huge gamer. But when I was a kid, I played all those games. And it’s funny, I play with my kids now, I have an old stand-up that’s got all these games on it. I got to load up that arcade with all my favorites, Robotron, Galaga–all these dumb games that I loved. So I built that in, but I never wanted that to overwhelm the central core of the story.”

Incredibly, Carnahan’s journey to get Boss Level made started as he was finishing up The Grey more than a decade ago. He had worked with Frank Grillo on that film (now a minor cult classic) and wanted Grillo for the part of Pulver in his time loop tale. But getting the backing to make it was an entirely different story and took 10 years, eventually employing what Carnahan describes as “not a traditional financing structure… every piece of bad luck you could encounter, we basically went through it all.” 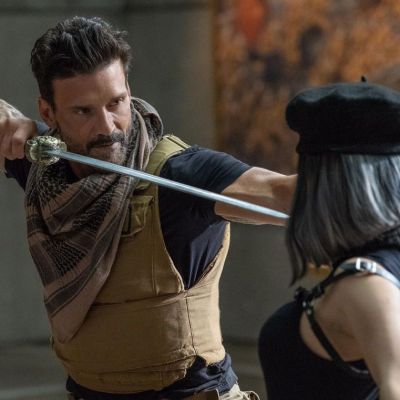 Boss Level is now premiering on Hulu, a result of its long, twisting road to existence, the rise of streaming outlets and the effects of the pandemic on traditional theatrical releases.

“I think the age of our traditional theatrical exhibition is done as we knew it,” says Carnahan confidently. “I think it’s going to shift in ways that people who are at the leading edge of that right now are figuring out… But I don’t think we’re going to go back to 350, 400 seats in a traditional kind of–I just don’t think you’re going to have that happening. Not for the foreseeable future.”

The future, both long term and short term, is very much at the heart of Boss Level. Grillo’s Roy Pulver begins to gradually extend his lifespan on each turn of the loop, living a little longer every go-round and discovering another piece of information that he needs to solve the puzzle he’s trapped in. But while Pulver’s life, those of his wife and son, and possibly many others are at stake, Carnahan says that first and foremost he wanted to make a bonkers action movie that pushed the genre to its limits.

“I was able to make an action movie/Three Stooges film,” he says. “So it was kind of an ideal scenario for me, because we could really go bananas and gonzo with the stuff that we were doing. But listen, you’re always looking to evolve the form. I think that we want to keep pushing it. I don’t know that you’re going to be able to do just the straight action film anymore without any kind of emotional content–without some sort of heart and soul. I think the Marvel films have done this so well, combining this big kind of spectacle action filmmaking with heart, with these small, idiosyncratic and quirky moments.”

Boss Level is the latest movie to emerge from Warparty, the production company that Carnahan and Grillo officially began in 2016. Grillo, of course, has enjoyed a long career as one of film’s most reliable tough guys, especially in movies like The Grey, End of Watch, Zero Dark Thirty, The Purge: Anarchy, and The Purge: Election Year, while also playing the villainous Brock Rumlow/Crossbones in the Marvel Cinematic Universe. Carnahan says that their similar tastes and outlook is what makes the partnership work and drives their acquisition of material to produce.

“We’re always looking for kind of elevated genre stuff,” Carnahan says. “Stuff that we think we can sink our teeth into and make better than the sum of its parts, [so] that we’re not just doing an action film, or a horror film, or a thriller. We want to plus it up. Frank and I have a great ease of use. We have a great shorthand at this point. We just know how the other one’s going to move in a situation and what to expect, and so on. There’s great comfort and certainly great creative strength in that.”

With both men producing, Grillo acting and Carnahan directing or writing or both, the pair have several formidable projects coming down the pipeline. One is an English language version of the already classic 2011 Indonesian action thriller The Raid, which has yet to start filming, while the other, Copshop, is now in post-production. The latter film teams Grillo with Gerard Butler, and Carnahan promises that the sparks will fly between the two action heavyweights.

“They’re dynamite,” the director exclaims. “I’ll say right now, I don’t know that Gerry’s ever been better in a movie. That’s how good he is in Copshop. He’s dynamite, man. He’s really, really something in this film. I think people are going to kind of be blown away. And then there’s this young woman, Alexis Lauder, who’s basically the lead of the film. She’s just a movie star. She’s just absolutely captivating. And the movie is really good. I’m very proud of it and I think audiences are going to dig it.”

As for whether we’ll see Butler and Grillo go head to head in a fight sequence or two in the film, Carnahan doesn’t want to get into details but adds, “We’re not going to disappoint people.”

Right now, however, Carnahan is focused on getting the word out about Boss Level, and is not shy about what he thinks he, Grillo, and their team have accomplished with it.

“I think it’s the best action movie of the last five years,” he says. “I just think it’s awesome and it’s funny. It’s rare that you make a film where everything that movie tries to do, it succeeds at doing. I think that’s a great testament to the people involved in it and how, even when it seemed like it was born under a bad sign, we still persevered. I just think it’s a blast, and a hell of a lot of fun on a Friday or Saturday night.”