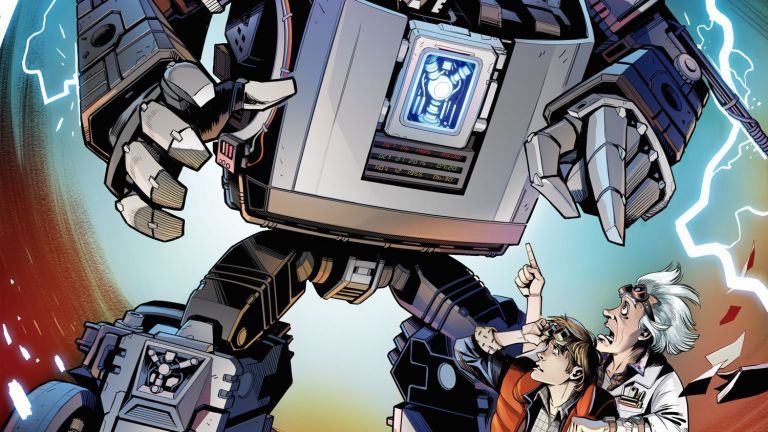 Great Scott! Two blockbuster 1980s properties are teaming up for the first time ever!

To paraphrase Doc Brown, you’re going to see some serious shit when Back to the Future meets the Transformers. And plans for such a mind-blowing crossover have just been unwrapped!

It’s been 35 years since Back to the Future premiered in theaters — yep, you’re old — and to commemorate this milestone, Hasbro is partnering with Amblin Entertainment to create a multi-platform event that will forever change the way you look at the franchise…as well as certain alien robots with a penchant for proving time and time again that they are more than meet the eye.

Meet Gigawatt, a new Autobot inspired by Doc Brown’s iconic Delorean time machine. Ol’ Gigs here is the centerpiece of the Back to the Future and Transformers Collaborative team-up. The details on this most cool of collectibles is enough to get anybody’s engines up to 88 mph:

The figure stands at 5.5 inches in Robot mode and can convert to Time Machine mode in 17 steps, plus it includes a blaster and whip antennae accessories, and features movie-inspired details from the film, including Doc Brown-style goggles, a flux capacitor chest piece, and time circuits. In time machine mode, the gullwing doors open and wheels rotate from vertical to horizontal to produce a hovering effect as seen at the end of the film.

Whoa, this is heavy. But there’s also the upcoming Transformers/Back to the Future comic from IDW, a four-part event that promises to be a totally awesome happening:

Marty McFly has just returned to his home sweet home, Hill Valley 1985, and everything’s looking up… that is, until Marty and his friend Doc Brown’s time machine attracts the attention of the Decepticons! With one small mistake, Marty finds himself thrust into adventure to stop the Decepticon plot in the past, present, and future… all with the help of a new time machine: the Autobot, Gigawatt!

A Walmart exclusive pre-order, limited to 1985 pieces, natch, is available now in special packaging. If you miss out on this though, fear not, as a second variant release will be available from Hasbro’s Pulse site beginning on October 1st (the first issue of the comic hits stores then too).

Story details are scant at this point, but it’s been a rough year and we’re hoping that Biff is some sort of Decepticon secret agent. We’ll have more on this as it develops, in the meantime don’t be a butthead and ignore this dream team-up!