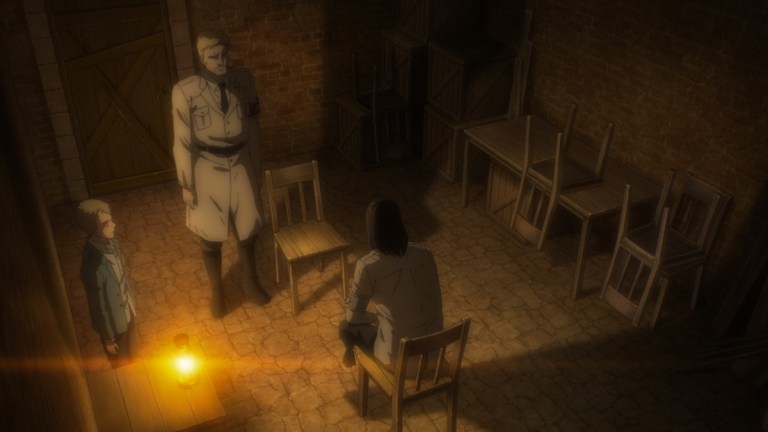 “If you were trying to save the world, well then I guess you didn’t have a choice, did you?”

Attack on Titan’s previous episode addressed the idea of conscription returning to Marley and emphasized how the nation can’t help but engage in war. Conflict is in Marley’s very nature and they’ve developed an existence that consists of expansion or destruction. However, it doesn’t matter how much Marley acquires because it’s not even really about them strengthening their empire. It’s that they don’t know how to exist without war. They’re incapable of doing anything else.

This final season of Attack on Titan has carefully contrasted Reiner and Eren as alternate heroes for opposing causes, but Marley’s “conquer or die” philosophy highlights how identical these two characters are. They’re two individuals who can’t do anything but endlessly fight for their cause with every fiber of their beings. There is no alternative and “Declaration of War” shows the danger of when two unmovable forces like that collide.

Episodes like “Declaration of War” are my very favorite pieces of television. The timeline for this entry is very boiled down and the majority of it takes place over the course of a speech and a stage play. It’s mostly a conversation, yet it’s packed with more tension than any other episode from this season. “Declaration of War” makes every sentence count and it’s a highly emotional affair. It’s consistently gripping to see someone as steadfast as Reiner get reduced to a trembling, sobbing mess as Eren just confidently breezes through his plan.

The episode juxtaposes this dread with the juvenile Marleyian play about their manufactured history regarding the Titans and King Fritz, which only further highlights the mix of extremes that are present (those weird ass trombones from the festival are also a fantastic touch). There’s a very innocuous moment where Reiner’s mother and Annie’s father commiserate over how their children have dedicated themselves to war, but Mr. Leonhart is lost in denial over Annie and insists that she’s still alive. It may not feel like much, but Bertholdt and other casualties are also characters that have parents just like Reiner and Annie who don’t get to have closure over their children’s deaths and are forced to find ways to continue to live.

Reiner’s fear over Eren through all of this highlights one of the most satisfying elements of a series when it’s in its final season, which is looking at how far characters have come since the beginning. Eren made great strides last season, but it’s hard to even recognize the lost and petrified Eren that whined his way through the first two seasons of the series. This Eren does not give a damn and it’s chilling when he threatens to turn into a Titan and kill the people in Reiner’s community considering that when the anime begins Eren’s on the receiving end of this destruction and his people are under siege. It’s a powerful level of irony that’s definitely not lost on Attack on Titan considering this final season’s promotional art has revolved around this idea, but it’s still extremely effective and hammers in the anime’s larger points.

Willy Tybur’s big speech is positioned as the centerpiece of the Liberio Festival, but it’s also the episode’s highlight. Attack on Titan effectively builds anticipation over Willy’s proclamation about his plan for the Titans. It’s such a satisfying monologue that sets the stage for where this final season—and the series as a whole—is heading. Willy combs through his revelation that Marleyan history on the glory of Helos is all a lie and that King Fritz is actually a savior, not a villain. Willy goes on to explain that Fritz promised to not subject Marley to the Founding Titan if these two nations could find a way to live in peace and abolish war.

All of Marley’s propaganda has been in service of this peace and to prevent a war-torn future, even if it’s all predicated on lies. This is huge news for the Marleyan population to consider, but there’s a seismic addendum that’s included with all of this. Willy explains in a very calculated manner that this peace has been destroyed by one specific individual, Eren Jaeger, who has claimed the Founding Titan ability for himself.

The Marleyan population has never heard of Eren before, but his name immediately galvanizes them all and gives the people a common enemy. It only takes a few sentences for Willy to put a gigantic target on Eren’s back and turn him into a scapegoat for an entire nation. It’s an absolutely chilling moment that’s up there with the very best scenes from Attack on Titan. Marley has a clear figure to focus their rage on, but they don’t even know that he’s already within their ranks. Another terrifying wrinkle in Willy’s plan is that he’s accounted for Eren’s actions to kill him and many of the people at the festival, but he knows that this is the necessary step to trigger war and solidify Eren as the villain that he’s painted him to be. He gets exactly what he wants.

Willy’s plan for martyrdom could not be more perfect, but it unexpectedly proctors an unusual partnership between Eren and Reiner that may be the only key to a future where Marley and Eldia aren’t both flaming wrecks. This culminates with the episode’s extremely rewarding conclusion where Eren and Reiner both fully understand that they’re the same. Both of these characters reflect how much the events of the series have changed them when Reiner begs for forgiveness and Eren insists that he doesn’t even have anything to apologize over. It’s the unifying catalyst that’s necessary to throw them headfirst into battle.

The final moments of “Declaration of War” are significant for a handful of reasons that will all have major repercussions, but it also feels like everything in this season up until this point has been prologue and that Attack on Titan’s conflict is about to finally begin. Willy’s been crushed. The spark has been lit. This episode is methodical and self-contained, but it’s full of exactly what makes this series so good. Every minute of “Declaration of War” is gripping and a showcase for strong storytelling and character development.

Oh, and Pieck and Porco fall through a pitfall trap that’s almost certainly the work of Team Rocket. But don’t worry, it’s a good thing.