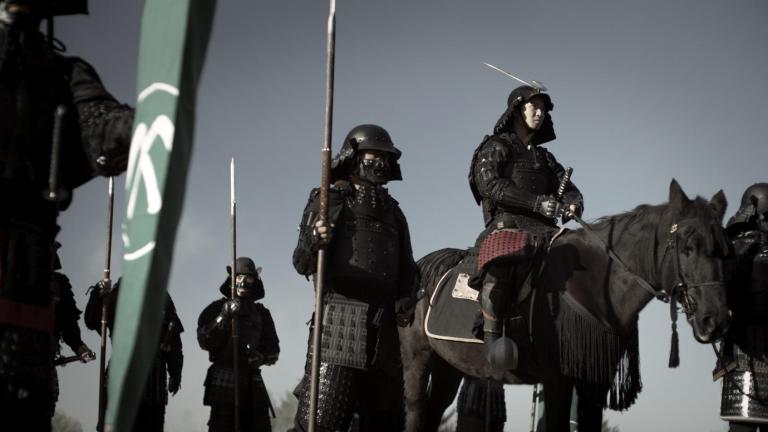 Age of Samurai: Battle for Japan, a new historical documentary series on Netflix, is being billed as a “real-life Game of Thrones” but it’s much more than that. This is actual history, which is far more compelling than fantasy because it really transpired. “It is like something out of a movie,” says showrunner Matt Booi. “If you wrote this down, no one would believe it. And if you saw it, I think you’d say, ‘Nah.’ But it happened.”

According to Booi, the show covers one of the most violent periods in Japanese history. The six-part series begins in 1551 with the death of feudal lord Oda Nobuhide and follows the rise of three of Japan’s most influential warriors: Nobuhide’s son, Oda Nobunaga (Masayoshi Haneda), Tokugawa Ieyasu (Hayate Masao), and Toyotomi Hideyoshi (Masami Kosaka). Japanese historians, as well as dedicated fans of Samurai movies, will be all too familiar with these three Samurai because their impact on Japan, and their consequential representation in Japanese media, is enormous.

“It’s something that a lot of people outside Japan don’t know a lot about,” Booi says. “They know the iconic sort of figure of the Samurais, but a lot of the minutiae was missing. Netflix understood, and so did we, that this was a great story that is going to resonate with a lot of people.”

Nobunaga, Ieyasu, and Hideyoshi lived during Japan’s sanguineous Sengoku period (1467-1615). Sengoku means “warring states.” It was a time when the country was ravaged by civil war, political intrigue, and upheaval. This period is the setting of almost every Samurai story. It was when these noble and brutal swordsmen were beginning to become eclipsed by firearms. “That’s what makes this era so poignant,” Booi explains, “We’re seeing the end of an era. It’s like the same way that guns ended the mounted knight in Europe.”

Booi understands why Age of Samurai: Battle for Japan is being compared to one of the biggest TV series of the last decade, too. “The Game of Thrones reference is a nod to the political maneuvering that is happening on the political landscape at this time. It’s a chessboard that these certain players are moving key pieces to try and control it all. It really is about an attempt by a handful of people to gain control over a fractured nation.” Like Game of Thrones, the Sengoku period is an epic saga, full of tales of honor, ruthlessness, and betrayal. It is one of the most colorful eras of Japanese history.

And that color is red – blood red.

Lessons from Akira Kurosawa and Manga

When it comes to Samurai films, the undisputed master was Japanese auteur Akira Kurosawa. One of the world’s most celebrated directors, Kurosawa made classic films like Hidden Fortress (the inspiration for Star Wars), Seven Samurai (the inspiration for The Magnificent Seven, Battle Beyond the Stars, and many more) and the psychologically relevant Rashomon. The Samurai genre owes a tremendous debt to his work.

“I’m such a Kurosawa fan,” Booi says. “In terms of cinema, he rules over everyone almost in my mind. His ability to tell a story visually, I don’t think you can touch it. He’s just so astonishing. He’s the greatest. He’s the master. In terms of movement and shots, of how nature was, it was always something that we were aspiring to try and walk a little bit in his shadow.”

Additionally, Age of Samurai: Battle for Japan stole some pages from another leading Japanese media. According to Booi, graphic novels were a major source of inspiration. “If you look at the composition of shots, look at the color, at the color correct, it’s very dark. It’s a very gritty world punctuated by blasts of color, the reds of the blood, the red of the armor sometimes. So we thought a lot about graphic novels because, obviously, that’s such a big part of the world of contemporary Samurai lovers. We wanted that to inform it.”

Furthermore, many of the re-enactment scenes are framed through doorways and such to resemble a graphic novel panel. This was a very conscious effort from the filmmakers. “There are two motifs that are heavily used, and one is blood and one is ink,” Booi explains. “The history of Japan in this period really seemed like it was written in blood and ink. Graphically, we were trying to make a world that nodded its head towards graphic novels and comics in general.”

Several battle scenes are shot in shadowy darker tones, contrasted by brilliant splashes of digital blood. “We might’ve got a little carried away with that,” Booi confesses, “but it’s hard not to when you’re in that world…It’s pretty shocking though when you get into some of the accounts of Nobunaga literally putting swords through just unfathomable amounts of people who stood in his way.”

Getting the Battles Right

Age of Samurai: Battle for Japan balances these ferocious battle reenactments with explanations from some of the world’s leading scholars and authors. They put the violence into historical perspective.

“We leaned on what we thought were some of the best storytellers, not just best academics,” Booi says, “people who can not only download the information but do it in a way that was comprehensible but also entertaining, because for so many of our viewers, a lot of these ideas and these concepts and even names are going to be very foreign. To have people like we had to unpack this for us was really incredible.” 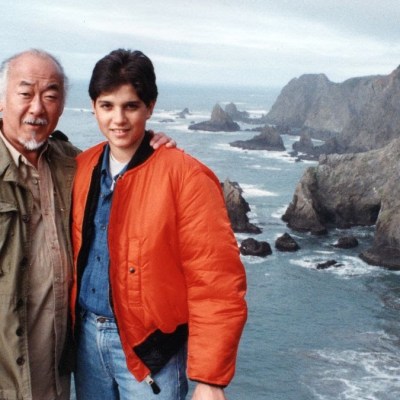 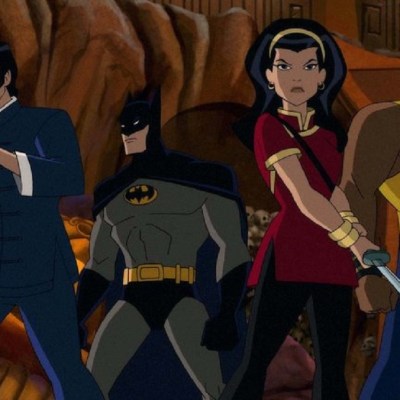 For any period project, historical accuracy is key. Authenticity was paramount for the production. Booi’s team sourced armor and weaponry from some leading companies that make them for other Japanese historical activities. “Some we had to make,” Booi admits. “Obviously, authenticity is really difficult when you’re dealing with such intricate designs and such incredible craftsmanship.” The filmmakers made sure objects like the family crests were accurate and were careful not to have them pop up in the wrong places. “It was incredibly challenging to try and portray any of it accurately.”

Another critical detail was to shoot all the reenactments in Japanese. Age of Samurai: Battle for Japan is produced by the Toronto-based production company Cream so Japanese dialogue presented a unique challenge, both during production and for editing. “It was an essential obstacle. We all felt that trying to tell this story, if we did not have Japanese-speaking actors representing these people, there would be no credibility. There would be no authenticity.” The Cream team felt that the whole thing would fall apart the minute one of the Samurai spoke in English. Japanese dialogue is translated with subtitles, including for the featured Japanese-speaking experts. However, the subtitling never gets obtrusive because the bulk of the story is in English. “We just felt that was non-negotiable, that it had to be there. And it was something that Netflix really backed us on too.”

Booi has made other military history documentaries. Among them are award-winning and Emmy-nominated productions such as Breathing Fire: The Secret Weapon of the Somme (Channel 4), The Weapon Hunter (Smithsonian Channel), and Blood and Fury: America’s Civil War (AHC). War stories are his specialty.

“There’s so many things that draw me to the genre. There’s the sweeping sort of historical stuff, but also as somebody who is really interested in stories, I think you can get some of the most gripping and entertaining stuff when people are forced with sort of life-and-death decisions like that.” Booi feels that telling the big picture stuff through personal stories is particularly compelling, which is why he focused his lens upon Nobunaga, Ieyasu, and Hideyoshi. As Booi says, “Looking at what happens with those three guys, you get an incredible window into how the period ends ultimately and how the next period begins.”

Nobunaga alone is a fascinating figure. He has been portrayed repeatedly in movies, books, manga, anime, and even video games, usually as the villain, but not always. Kurosawa’s award-winning film Kagamusha depicted Nobunaga as a strong and respectful leader. Booi can’t categorize him as a villain or a hero. “It’s hard not to stand back and be sort of knocked out by his ambition, his genius. But on the other hand, it’s tough not to be revolted by his violence and cruelty. He would do anything for power.”

“It’s not by accident that one of our contributors constantly refers to him as sort of an Alexander the Great of Japan in that he was just so innovative. He was raised with so much tradition, but he wasn’t bound by it. That’s what’s so fascinating about him. He’s constantly doing the unexpected.”

In many ways, Age of Samurai: Battle for Japan is an exploration of how power corrupts. “It’s really interesting to watch what happened to Nobunaga and how the decisions that he makes later on in the show come back to haunt him.”

Without dropping any spoilers (although anyone can just look up the Sengoku period online to find out what happens), Age of Samurai: Battle for Japan examines the consequences of what power does to a person and how it can cause devastating blind spots. It’s a time-honored tale, still so relevant for our time.

“There’s always an appetite for some stories about the Samurai,” Booi says. “It was such a lovely period because it’s such a violent world, but it’s also a world that is so bound by honor and duty.” Booi enjoyed exploring both sides of the same coin. “It’s just such a remarkable world.”

For Booi, the Game of Thrones reference is an easy comparison to make. “But I think that’s where it ends. There’s lots more than the fantasy element of that.” Being reality based, Age of Samurai: Battle for Japan doesn’t include sorcery or White Walkers. “We have a one-eyed dragon,” Booi teases with a grin. But to learn who that was, you’ll just have to watch it.

Age of Samurai: Battle for Japan is a six-part series that premieres on Netflix on February 24, 2021.

Black Lightning Season 4 Episode 3: The Book of Reconstruction Chapter 3: Despite All My Rage