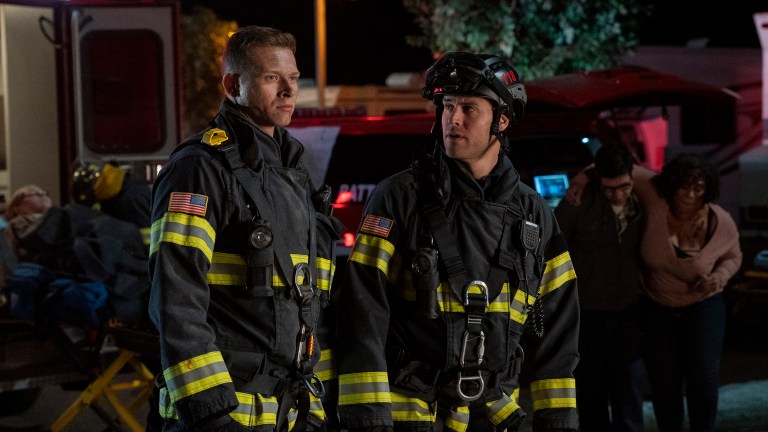 It’s never a bad time to dramatize the very busy and dangerous world of 911 first responders. This year, however, Fox’s long-running drama 9-1-1 will prove particularly resonant. Fox announced that it had renewed 9-1-1 for season 4 back in April of 2020, which was right near the beginning of the United States’ struggle with COVID-19.

The show’s production experienced some delays before launching in October of 2020. Now, 9-1-1 season 4 is set to arrive soon, and will have plenty of dramatic ground to cover. This is all to say that yes: coronavirus will play a factor in season 4’s scripts, according to showrunner Tim Minear.

“The characters on the screen will have gone through what the audience has gone through,” Minear told TVLine. “There may be flashbacks that will show what our people went through at the height of the (pandemic), but by the time we resume physical production, that means the world will have figured out how to start opening for business again.”

Here is everything we know about 9-1-1 season 4, including a release date, cast, and details on the announced crossover with 9-1-1: Lone Star.

Despite some inevitable coronavirus delays, 9-1-1 season 4 was able to achieve a pretty ambitious release date. The first episode of this season, “The New Abnormal”, premieres on Monday, Jan. 18 at 8 p.m. ET on Fox. The description for the first episode reads:

“When the Hollywood Reservoir dam breaks, Bobby and the 118 race into action to save passengers on a city bus that has crashed into a building several stories in the air. Maddie must first locate, and then rescue, a trapped cyclist, and Athena helps an agoraphobic woman evacuate her home.”

9-1-1 has also been known for many notable guest stars with Ronda Roussey turning up last season. This year, the first confirmed guest star is Nikki DeLoach (Awkward). Per TVLine, DeLoach will be portraying a cyclist who gets caught in a dam break.

The latest trailer for 9-1-1 season 4 offers up some more action from episode 1’s dam break.

The first trailer for 9-1-1 season 4 features a dam breaking and taking out the Hollywood sign…because that’s just how this show rolls.

In the same interview with TVLine in which he revealed that 9-1-1 season 4 would address the coronavirus, showrunner Tim Minear mentioned that it wouldn’t be a main feature of the show this year, “Maybe our role is to demonstrate through our little fantasy show that life will go on. So, yes, it will exist in our universe — and life will continue.”

In an interview with The Wrap, Minear said that season 4 would focus more on the inner lives of its characters. This includes the reveal of a secret that Maddie has been keeping about her and Buck’s childhood to be revealed in the episode titled “Buck Begins.”

Of course, the big event this time around will be the crossover between the main flagship series and its spinoff 9-1-1: Lone Star. According to The Wrap, episode 3 of each show will feature the crossover and it will involve 9-1-1’s characters traveling to Austin, Texas to assist in stopping a massive wildfire. The crossover will air on Feb. 1.